The association was founded on June 26, 1949 as a social association of the Augustine Church in Amsterdam-West. In 1950 our club officially became a member of the Dutch Table Tennis Association. Competition secretary Mr. J. van Leijden came up with the idea of using the name “Parochieve Table Tennis Association JO.V.O.” (the name was derived from the patron saint of the club, the Augustinian monk Johannes van Oisterwijk) to change to R.K.S.V. Jovo, but now as an abbreviation for the less religious ‘Young Forward’.

In a short time there was a thriving association with all kinds of activities. Within a few years, Jovo was suddenly an association that counted within the Amsterdam department. At the beginning of 1951, Jovo already owned 4, partly self-made, tables. There were even temporary departments of tennis and volleyball.
In the 1960s, Jovo had the largest youth department of the Amsterdam department and we played with the maximum number of 12 youth teams. At the end of the 1970s, Jovo had two national youth teams and a total of over a hundred members. There was even a temporary membership freeze for the senior section. In the 1980s, Jovo had 140 members, a record. 1988 was a special year, partly because of the fact that several TV recordings of Jovo were made.
Due to the stopping of a number of active members in the mid-1990s, the decline of members started. The curtain fell for the recreationists in 1997, as well as for the youth department. The 50th anniversary of Jovo was celebrated with great joy in 1999 in its own beautifully decorated location, despite the decline of members. About 50 men, including many prominent former members, reminisced about times long gone.
The arrival of a number of enthusiastic members of the defunct Leoos club gave Jovo another injection. They provided new blood. Jovo had 19 teams in 2001 and in that year Jovo became 1st champion in the 1st class of the Amsterdam division and the team was allowed to play nationally.
After playing for 43 years in the familiar hall of what once started as the Sint Dominicus Mulo, our accommodation was given a different destination and we had to find a new playing hall. In 2003, thanks to the efforts of the Jovo board (especially the chairman), we moved into the current accommodation at the Wachterlied park. Thanks to a few very enthusiastic members, a beautiful and very cozy canteen was built at the hall. Our disappointment was therefore great when we had to leave again after a few years due to the corona crisis. a large-scale renovation of the building and its surroundings. That was also the end of our beloved canteen.
After a few miserable years in temporary accommodation, we are back at the Wachterliedplantsoen and once again have access to a spacious, well-lit hall and a beautiful canteen with a view of the hall. Hopefully the future will bring us many more beautiful years over there. 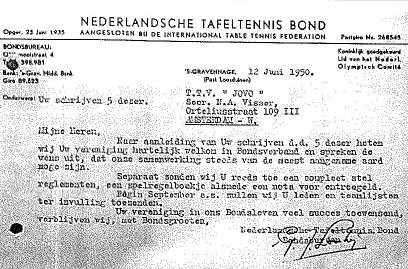